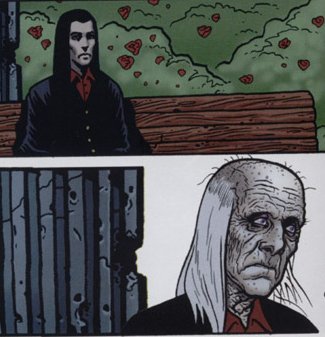 One of the things that sucks about being a vampire.
But thy strong Hours indignant work'd their wills,
And beat me down and marr'd and wasted me,
And tho' they could not end me, left me maim'd
To dwell in presence of immortal youth,
Immortal age beside immortal youth,
And all I was in ashes.
— Alfred, Lord Tennyson, "Tithonus"
Advertisement:

So someone wishes to be Immortal—well, he'd better be careful what he wishes for. Whereas some characters may be Older Than They Look and actually several hundred years old, other characters look exactly how old they are... they simply keep aging without dying. The most simple definition of "immortality" is "unending life." There's nothing about youth in there.

The Trope Maker is possibly the Greek myths of Tithonus,

whose lover and abductor, the dawn goddess Eos, asked Zeus for immortality for him. Because of a curse Aphrodite laid upon Eos, she forgot to ask Zeus to also simultaneously bless the man with eternal youth. As a result of Eos' thoughtlessness, poor Tithonus eventually ended up an immobile old man, squeaking endlessly, but still living forever, making this Older Than Feudalism. (Zeus eventually took pity on him, though, and let the living fossil find a fulfilling career as the first cricket.) There is also the myth of Sibyl, a mortal prophetess, wished to the gods for immortality, and was granted this. However, she forgot to wish for eternal youth, and thus, did not receive it. Eventually, she withered down to tiny size, and was placed in a tree by children, who would ask her what she wished for. She would answer, "I wish to die".

This is a(n ugly) sister trope to Vain Sorceress, who hides her aging with magic. Compare Immortality Immorality and Who Wants to Live Forever?. Compare and contrast Elderly Immortal, where the immortal character looks like an old person but doesn't continue to age. Immortality Begins at Twenty is an aversion; the character was made immortal while young and retains their youth. May be a punishment Death levies on its enemies, or a result of being defeated. It may also be the price of a Deal with the Devil for immortality. The inversion of this trope is Not Growing Up Sucks.