Literature / The Gods of Pegāna 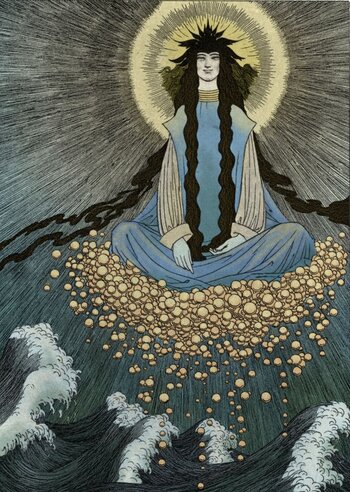 A book of short stories by Lord Dunsany, published in 1905 and therefore in the public domain

. Despite its relative obscurity nowadays, it had a great influence on many important fantasy authors, such as J. R. R. Tolkien, C. S. Lewis, H. P. Lovecraft, and Ursula K. Le Guin.

The book is basically an exercise in Worldbuilding by Dunsany, an Atheist who lamented the Death of the Old Gods and set off to create his own polytheism — there's little plot to speak of, but many short vignettes depicting his resultant deities. It chronicles a few isolated parts of the history of an invented universe, starting with its creation at the probably metaphorical hands of Māna-Yood-Sushāī and ending with the apocalypse.

The pantheon of Pegāna would later appear in Dunsany's short story collections Time and the Gods and The Sword of Welleran and Other Stories.

The Gods of Pegāna contains examples of: