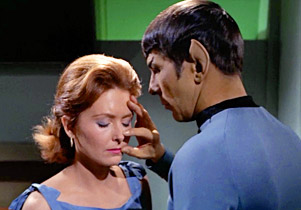 "My mind to your mind... my thoughts to your thoughts..."
"You think...you think I'm touching your head too hard!"
— Lister, Red Dwarf
Advertisement:

A common variation on Telepathy is to have it related to skin on skin contact, the psychic may have to put their hands on the subject's head or something. Or it may be a form of Power Incontinence and they automatically read the mind of anyone they touch. Particularly popular for adding a little Rule of Cool to what would otherwise just be a character just doing the Pstandard Psychic Pstance, especially in cases where telepathy is being used aggressively. Also common when performing Mental Fusion.

Subtrope of Psychic Link. Psychometry is a Sister Trope that allows someone to read the history of objects (and occasionally people) by touching them.

Sky, a telepathic alien, can read minds of those whom she makes physical contact with.

Sky, a telepathic alien, can read minds of those whom she makes physical contact with.