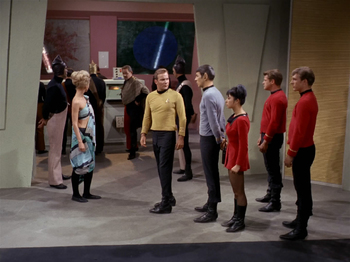 Background: the computers on which the Eminians fight their war. Kirk's face says it all, doesn't it?
Advertisement:

The episode opens with the Enterprise shuttling Robert Fox, an obnoxious ambassador to the planet Eminiar VII, to negotiate a diplomatic agreement with its people. However, after several days of communicator silence from the planet, Eminiar finally responds with a universal code warning the ship not to enter their space for any reason. For once, Kirk is fairly eager to respect the wishes of the planet and stay out of Dodge... but the ambassador is not, and serves the crew with some absurd ambassadorial authority the Federation's leadership has granted him, ordering the ship to proceed to the planet.

Upon arriving at Eminiar, Kirk ditches the Rules Lawyer on the ship and takes a landing party to meet with the planet's commander, Anan 7. Anan chides them for disregarding the warning and explains it was for their protection: the planet's currently embroiled in a terrible war with its neighboring planet Vendikar. However, a scan revealing a complete lack of any of the destruction or loss of life commonly associated with war suggests to Kirk that this "war" of theirs is a Cozy Catastrophe at best and an Inferred Holocaust at worst.

As if to prove Anan's point, an incoming attack is announced, and everyone rushes to their computers. They talk about several strikes breaking through their defenses and massive casualties, yet the regular reports from Scotty and everyone else on Kirk's ship indicate no explosions, surges of radiation, or destruction of any kind. Still, the casualties mount, and then Spock starts realizing this war of theirs is purely theoretical. Say what? Yes, it turns out that Eminiar and Vendikar are actually in the middle of recreating the final scenes of WarGames, but in this war, the calculated dead in the affected areas are each given 24 hours to do their patriotic duty and march themselves into disintegration chambers.

In another twist of fate, it turns out one of the simulated attacks has also "destroyed" the Enterprise, forcing Anan 7 to hold the landing party hostage until the ship's crew is beamed down to be executed. Naturally, Kirk is having none of this, but Anan's security arrests the entire landing party and puts them under guard until he complies. To complicate matters further, Anan starts getting tired of waiting and opens fire on the Enterprise with sonic disruptors (don't you just love Star Trek and their penchant for Hollywood Science?).

When he can't make a dent in the shields, he then fakes a message from Kirk to try to trick the crew into beaming down. McCoy and Scotty, in command, aren't buying it, but unfortunately the idiot ambassador is, and he transports himself down to the planet with just his aide in tow after failing to convince Scotty to comply with Anan's orders. As pretty much everyone else anticipated, Anan's security forces promptly arrest them both to march them off to one of their disintegration chambers.

Fortunately for him, Kirk and Spock have managed to escape their captors and are wreaking havoc on Eminiar's tidy little war machine, with Spock demolishing every death chamber he can find (saving the ambassador's sorry life in the process), while Kirk has a good long talk with Anan, trying to intimidate the man by claiming to be able to destroy the planet with just his phasers. Unimpressed, Anan tries one last time to get Kirk to bring down his crew for the slaughter, but Kirk just orders Scotty to execute a planetary bombardment order if they don't hear from him within 2 hours.

Anan continues trying to force Kirk and his crew into compliance, but unfortunately for him, Kirk has had enough of this tidy little theoretical war and manages to strong-arm his way into the war machine's central computer core. With a little help from Spock, he sets the whole thing to blow and then phasers it into oblivion. Anan is understandably horrified, as the computer's destruction nullifies the agreement Eminiar had with Vendikar that created the whole theoretical war in the first place, meaning that now they'll have to fight a real war with all its random havoc and horror that the theoretical war was intended to prevent.

This, of course, is entirely what Kirk intended: he gambled that the same orderly mindset that enabled both planets to find such a neat and tidy way of avoiding the messier and more graphic horrors that usually come from fighting a war will now force them to negotiate a peace agreement to put a stop to their conflict before they experience the real thing. Anan acknowledges Kirk's point, and with the help of the (now chastened and much more sensible) ambassador, hails the Vendikan rulers and begins negotiating for peace.

Safely back on his ship, Kirk calls off the bombardment order. On their way out, they receive word from the ambassador that prospects for reaching an agreement with Vendikar are, so far, looking quite hopeful.

A Taste of Tropes