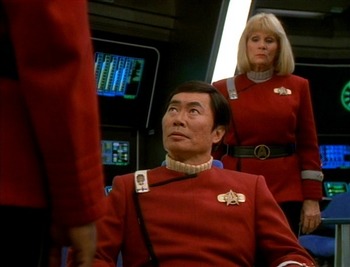 Oh, my! Look who it is!
A nebula encountered by Voyager opens up a repressed memory in Tuvok, which is determined to be some kind of virus passed to him at some point in his past. Tuvok and Janeway undergo a mind-meld to try finding the point at which the virus took hold, and find themselves standing in the middle of the events seen in Star Trek VI: The Undiscovered Country.
Advertisement:

This was Voyager's Milestone Celebration for the 30th Anniversary of Star Trek, along with Deep Space Nine's "Trials and Tribble-ations". Besides George Takei reprising his role as Hikaru Sulu, it also features Grace Lee Whitney reprising hers as Janice Rand, now a Commander on board the Excelsior.