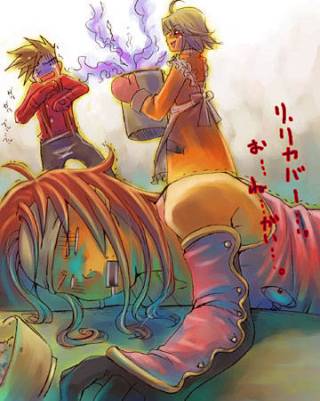 "It's a new recipe! He loved it so much he passed out!"
"Terrible, isn't it? On a scale of one to ten, ten being the most revolting and one being almost edible, I believe that rating this recipe would require the use of exponents."
— Invidia (on the Vord Queen's cooking), First Lord's Fury
Advertisement:

Some people cannot cook. They burn breakfast so bad that you lose your lunch preemptively. When they cook dinner, you can only think of dessert-ing. Even the Rats Won't Touch It. Sometimes, if you're lucky, they can cook something that can be charitably described as "food."

Sometimes their food merely tastes bad. However, it has also been known to cause nausea, vomiting, or hospitalization. If you're particularly unlucky, it can cause, well, just about anything. If dinner eats you, you're probably in a lethal chef's kitchen.

At worst, if a dish looks abominable beyond comprehension, it may be censored for the sake of the audience.

As you may have guessed, this is usually a comedy trope. In eastern media, most examples are female (emphasizing that they fail at an aspect of traditional femininity, or femininity in general, or that they're something of an Action Girl), but there are a ton of male examples in western media, probably tying in to the assumption that Men Can't Keep House and Dads Can't Cook.

There are a number of common variants. Sometimes someone is forced to stomach the lethal chef's food to avoid hurting their feelings. Sometimes they refuse to admit that they can't cook, despite mountains of evidence. And sometimes, if you're particularly lucky, their food merely looks bad, and tastes perfectly fine.

Lethal Chefs may be employees of a Lethal Eatery, and quite often can be found fixing up a stew of Mystery Meat. Most Camp Cooks fit this category. (Truth in Television for them, as their budgets and ingredients are limited.)

Compare the Cordon Bleugh Chef, who can cook just fine, but often gets too creative, the One-Note Cook, who can ace one dish, but otherwise falls into this trope, and the Evil Chef, who makes meals like this on purpose just to see you suffer. See also Lethally Stupid when the character is so dumb that it would be dangerous to let him cook. Contrast the Supreme Chef, who is the exact opposite of this trope, the Angry Chef, who has nothing but contempt for his customers and peers (and will probably reserve his nastiest profanities for chefs like this), and the Chef of Iron, who can be either bad or good, but is lethal outside of their cooking. Not to be confused with actual homicide by cooking, which is Cooked to Death.

The bread Zach presents in a baking competition proves to be by far the worst.

The bread Zach presents in a baking competition proves to be by far the worst.