Web Video / Ashens and the Quest for the Game Child 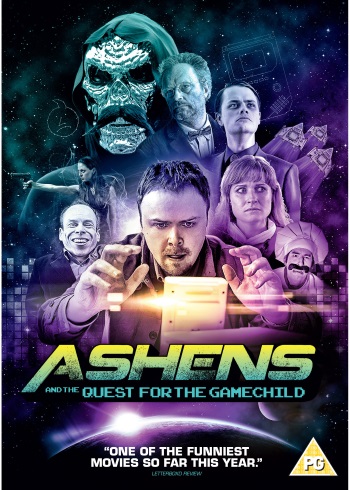 After appearing in the web series The Proxy, famous YouTube reviewer-man Dr Stuart Ashen wanted to harness the talents of the crew who worked on it to do his own bidding... He talked with the director, Riyad Barmania, about the possibility of producing his own feature film.

The result, announced on Ashen's channel in March 2013 and released on 8 August 2013, is Ashens and the Quest for the Gamechild (or "GameChild", or "Game Child"), an indie comedy adventure film starring Ashen as himself, as well as YouTubers such as Chris Kendall (Crabstickz), Dan Tomlinson (of Guksack) and PJ Liguori (KickthePJ). It also features the actors Robert Llewellyn, Kerry Gilbert, Millie Reeves and Warwick Davis.

The movie is about (as the name implies) the protagonist Ashens going on a quest to search for a Game Boy rip-off called the Game Child. He meets his Old Friend Geoffrey "Chef" Excellence, who encourages him to do so. On the way, he encounters two ex-girlfriends, his old university professor, his improvisational jazz musician neighbour the Silver Skull, and his annoying nemesis, Nemesis.

When the movie was announced, Ashens asked fans to donate funds for the movie via the crowdfunding website Indiegogo

The film was originally released for free on YouTube, but is presently only available digitally as a paid download

on Vimeo. It is also available for purchase on DVD and Blu-ray. A sequel, Ashens And The Polybius Heist, was announced in 2018 and released in 2020.