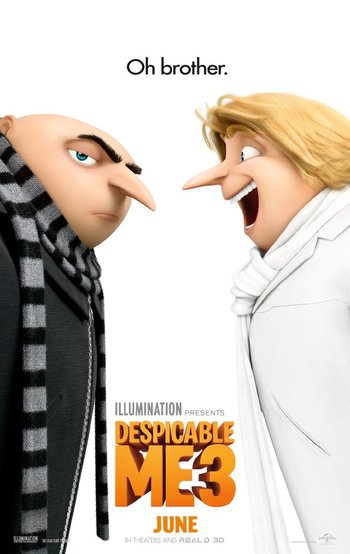 Two brothers who are total opposites. One of them is despicable. The other isn't.
Marlena: Shortly after you and your brother were born, your father and I divorced. We each took one son to raise on our own and promised never to see each other again. Obviously, I got second pick.
Gru: I have a brother...
Advertisement:

The third film in the series and fourth entry in the overall franchise, Despicable Me 3 is the 2017 sequel to Despicable Me 2 and is once again from Universal and Illumination Entertainment. The film once again centers around Gru (Steve Carell), along with his wife Lucy Wilde (Kristen Wiig), their three adopted daughters Margo, Edith and Agnes (Miranda Cosgrove, Dana Gaier and Nev Scharrel respectively) and the Minions (Pierre Coffin).

This time, a new villain, Former Child Star Balthazar Bratt (Trey Parker), surfaces, and Gru meets his long-lost twin brother Dru (also Steve Carell) — who is the complete opposite of his brother.

Besides the introductions of Bratt and Dru, new Anti-Villain League boss Valerie Da Vinci (Jenny Slate) fires both Gru and Lucy from the organization (Gru for botching the capture of Bratt, Lucy for standing up for Gru). Afterwards, Gru's self-esteem drops due to the firing, while Lucy has decided to become the perfect mom for their daughters. And speaking of the girls — Margo is trying to convince Lucy to be a "tough mother," Edith is being encouraged to incite more mischief by Uncle Dru and Agnes is trying to find a real unicorn.

Meanwhile, a Minion named Mel convinces the other Minions to revolt after Gru tells them that he refuses to go back to villainy.

Dru also wants to start becoming a supervillain, and hopes that his brother will help him get started.

Check out the first trailer here

and the third trailer here

According to the creators

, Despicable Me 4 is currently in development.

Despicable Me 3 provides examples of:

Example of:
"Kick Me" Prank