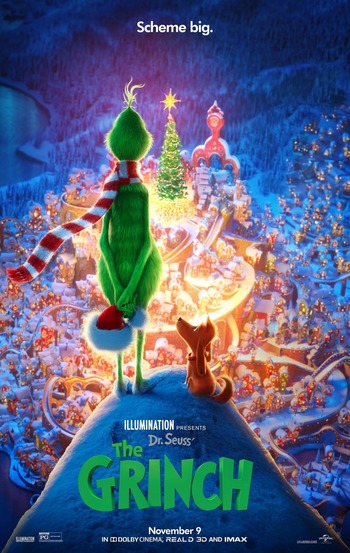 "Today we will do mean things, and we will do them in style!"
"For fifty-three years, Christmas has brought me nothing but misery. I know just what to do. I'll become Santa Claus to steal their Christmas. If he can deliver it in one night, then I can steal it."
— The Grinch
Advertisement:

A 2018 3D computer-animated film adaptation of Dr. Seuss's classic book How the Grinch Stole Christmas!, produced by Illumination Entertainment and directed by Scott Mosier (Clerks) and Yarrow Cheney (The Secret Life of Pets). The film was released on November 9, 2018.

It's the third screen adaptation of the book overall, the second feature-film adaptation after the 2000 film, and the second animated adaptation following the 1966 TV special, as well as Illumination's second adaptation of a Dr. Seuss book (after The Lorax in 2012), and the last Seuss adaptation to be directly approved by his widow Audrey Geisel (who passed away a month before its premiere after having served as president and founder of Dr. Seuss Enterprises).

The story is about the same. Out on the outskirts of Whoville lives an unpleasant fellow known only as The Grinch (voiced by Benedict Cumberbatch). He dwells in a cave high up on Mount Crumpit with his inventions and his dog, Max, and only ever sees his Who neighbors when he has to go into town to get himself food. One holiday season, the Grinch catches wind that the Whos plan to make their routine Christmas celebrations three times bigger this year, something he can't tolerate in the slightest. Eventually, he has the ultimate epiphany: to keep the peace and quiet he loves so much, he must become Santa Claus and steal Christmas.

Meanwhile, in the town of Whoville itself, one particular holiday loving Who, Cindy-Lou Who (voiced by Cameron Seely), just wants to ask Santa Claus for help for her overworked single mom. How does she do it? Plot with her friends to catch him, of course!

...So what's going to happen when her scheme collides with the Grinch's?

The Grinch contains examples of: