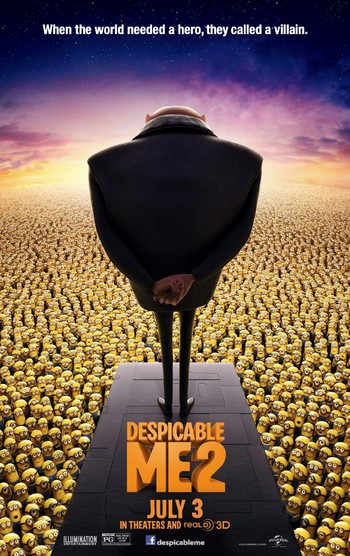 "As an ex-villain, you know how a villain thinks, how a villain acts."
Gru: Okay, now for the announcement: I have accepted a new job!
Margo: Whoa! Really?
Gru: Yes, I have been recruited by a top secret agency to go undercover and save the world!
Edith: You're gonna be a spy?!
Gru: That's right, baby! Gru's back in the game! With the gadgets and the weapons and cool car! The whole deal!
Edith: Awesome!
Agnes: Are you really gonna save the world?
Gru: Yes. Yes, I am.
Advertisement:

The 2013 sequel to Universal and Illumination Entertainment's Despicable Me once again follows Gru (Steve Carell), along with his three adopted girls Margo, Edith and Agnes (Miranda Cosgrove, Dana Gaier and Elsie Fisher respectively), and the Minions (Pierre Coffin and Chris Renaud).

Gru teams up with secret agent Lucy Wilde (Kristen Wiig) to track down a villain attempting to destroy the world. Gru must get into touch with his inner villain if he has any hope of defeating this ruthless mastermind, even though all he wants to do is settle down with his kids and make jam and jelly on the side. Things get tricky as his Minions start disappearing and he has a horrible flashback to his childhood. He also starts falling for the Fiery Redhead Lucy.

Despicable Me 2 provides examples of:

open/close all folders
Tropes A to E
Tropes F to J
Tropes K to O
Advertisement:
Tropes P to T
Tropes U to Z
Feedback

El Macho was one of the manliest supervillains to ever blight the Earth, his persona based on lucha libre.

El Macho was one of the manliest supervillains to ever blight the Earth, his persona based on lucha libre.