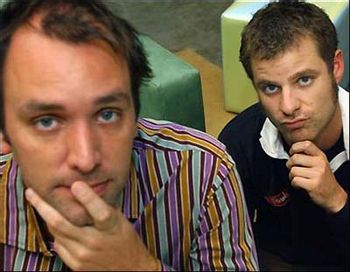 Can you guess which one of them used to have an afro back in the day?note Trey on the left, Matt on the right. The former afro owner was indeed Matt.
"Me and Matt love to argue, but in general our sense of humor is pretty much alike."
— Trey Parker
"We are entertainers. We're trying to entertain people."
— Matt Stone
Advertisement:

Trey Parker (born Randolph Severn Parker III, October 19, 1969) and Matt Stone (born Matthew Richard Stone, May 26, 1971) are creative partners in crime, best known for being the creators of Comedy Central's long-running, brutally satirical, extremely vulgar animated sitcom South Park. The two became friends in college and made their first short, The Spirit of Christmas (aka Jesus vs. Frosty), that caught the eye of many and got South Park launched as the success it still is.

Creative works by the two include:

They also starred in BASEketball (a fact that they are NOT proud of), but didn't write or direct. Trey has also voiced the villain in Despicable Me 3, a very different turn from the duo's usual adult fare.

Tropes related to the creators: