If It Swims, It Flies 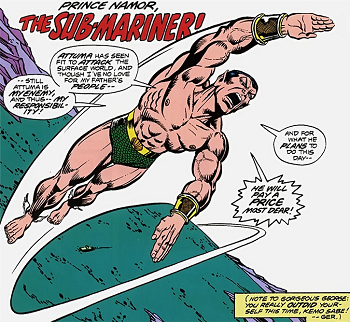 "A flying boat. What next, an underwater plane?"
— Comic Book Guy, The Simpsons Game
Advertisement:

So, you've got a nice team of heroes, each with a specialty and associated Giant Robot or vehicle. A fiery leader, a strong man, a flying ace, a cute Chick for good measure, and a naval master.

You hit an instant snag, though. Once you are out of range of the ocean, your naval man's mech loses its special value to the team. How does one make up for this Aquaman-level flaw?

Invoke the power of flight. Suddenly, that seafaring machine takes to the air.

It's not just mecha, by the way. Anything that looks like an aquatic vehicle can, with the right amount of thought or lack thereof, be converted to something that flies through the air or into space. After all, Space Is an Ocean, isn't it?