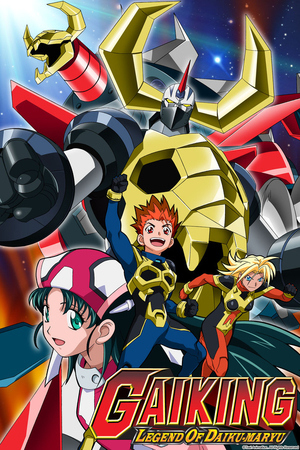 Gaiking: Legend of Daiku Maryu is a Super Robot anime produced by Toei Animation. It loosely adapts the 1976 anime, Gaiking, retaining the names and appearances of the the titular Humongous Mecha, and throwing in little references to the original series, such as recurring character names.

Five years ago, Daiya Tsuwabuki and his father were attacked by an enormous monster while out on a fishing trip. During the attack, Daiya's father was lost at sea, and has been since pronounced legally dead. However, Daiya alone believes that his father is still alive. He believes this because he remembers the gigantic dragon of metal that defeated the monster.

Then, one day, another monster appears in the town. The giant metal dragon reappears, and a girl summons him to pilot the Giant of Fire, Gaiking. Defeating it, he learns that the land of Darius, hidden away inside the Earth's centre, is sending these creatures as an invasion force, and the metal dragon - known as Daiku Maryu - and its crew are La Résistance against this attack.

Together with Gaiking and Daiku Maryu and its crew, Daiya ventures into the land of Darius to defeat the evil army that threatens the very existence of his entire race.

Character sheet is under construction.

Gaiking: Legend of Daiku Maryu began on the 12th of November, 2005, and ran for 39 episodes. It has also features in the Super Robot Wars games for the Nintendo DS, Super Robot Wars K and Super Robot Wars L. In January of 2011, Toei put up the entire series subtitled... poorly... on Hulu. People living in the United States can view it here.

The show is also available on Crunchyroll, Crackle, and the U.S. Playstation Video Store.