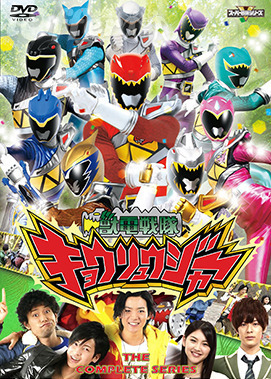 Brave In!
"Dinosaurs, plus humans! Crossing over millions of years to protect the world, history's strongest brave team has now arrived! LISTEN AND BE AMAZED!!!!"
Advertisement:

Zyuden Sentai Kyoryuger (roughly Beast Power Squadron Kyoryuger) is the 37th program in the Super Sentai franchise, airing from 2013 to 2014. It is the third dinosaur-themed installment in the franchise, following Kyōryū Sentai Zyuranger (1992) and Bakuryuu Sentai Abaranger (2003).

A long time ago, in the age of the dinosaurs, the Earth came under attack by an alien force known as the Deboss Army. However, they were defeated by a team of dinosaurs given supernatural powers, and sealed within the polar ice caps. Torin, the divine mentor of the heroes, stored the souls of these brave dinosaur warriors in capsules so that their power could be called upon if the threat of the Deboss ever returned.

Now in the modern age, a new team of humans are scouted by Torin to fight against the revived Deboss Army. Defeating their partner dinosaurs in single combat to earn their trust and respect, these chosen are granted their awesome prehistoric power and the ability to become the new generation of heroes, the Kyoryuger!