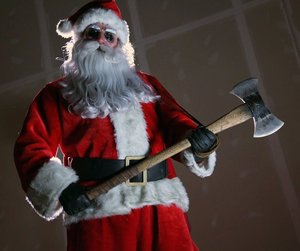 His black, soulless eyes and the cock of his head, soon gave me to know I had so much to dread.
From his beard to his boots, he was covered with ammo
Like a big, fat, drunk, disgruntled Yuletide Rambo
And he smiled as he said, with a twinkle in his eye
"Merry Christmas to all! Now you're all gonna die!"
— "Weird Al" Yankovic, "The Night Santa Went Crazy"
Advertisement:

Sometimes, the Anthropomorphic Personification of a beloved holiday just can't take the stress anymore. This may simply lead to shameful behavior, or it might end in a full-blown violent rampage. Alternately, there may be an impostor bringing shame to the red suit. Or instead of cracking under stress, he was Evil All Along. Or maybe an ordinary Mall Santa is just a Jerkass. Either way, we have a Bad Santa Claus on our hands. And remember what Laocoön said about Greeks bearing gifts.

For children brought up with the "commercialized" form of Christmas, Santa Claus can be seen as something of a symbol of divine judgment as well as a jolly child-friendly icon, making the Bad Santa almost like a combination between the Knight Templar and the Monster Clown. It isn't uncommon for the Bad Santa to herald his appearance with a twisted form of the 'naughty or nice' list — usually with severe penalties for whoever is judged "naughty".

See also The Krampus, a trope based on a concept often confused with this one, and Usurping Santa, when a bad person becomes Santa.

An extreme form of Paranoia Fuel, given the disturbing nature of a killer or monster masquerading as a figure trusted and admired by children. Named after the movie of the same name. If it's the real deal, it's a case of Adaptational Villainy. If not, it usually ends up fighting the real deal, Badass Santa! To see an exaggerated version of Bad Santa, see Santabomination. Compare Fallen Cupid, the corruption of another holiday icon. The presence of this usually leads to An Ass-Kicking Christmas.

Weird Al sings of the time when Santa went psycho.

Weird Al sings of the time when Santa went psycho.