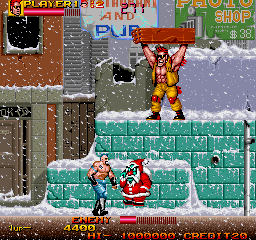 Crude Buster is a 1990 Arcade Game by Data East which was ported to the Sega Genesis in 1992. Released internationally under the Market-Based Title of either Two Crude or Two Crude Dudes, the game is a Beat 'em Up, and something of a spiritual sequel to Bad Dudes.

The year is 20XX. A nuclear weapon combined with chemicals made by a mad scientist explodes in the city of New York, turning many of the city's inhabitants into savage mutants under his control. The madman establishes an organization he calls "Big Valley," consisting of these mutants and many advanced military weapons, and takes the ruined city by force. Desperate, the US government hires two super-powered mercenaries to enter the city and eliminate the villains occupying it.

Players control either Ruth or his partner Sid by jumping, dodging and attacking their way through legions of enemies. Because the main characters are muscle-bound brawlers, they have the ability to pick up objects well beyond their own weight (e.g. cars and traffic lights) to use as weapons. While playing co-op, it is also possible for one player to pick up the other to use as a projectile.

The game later received a Genesis port which, along with the inevitable graphical and sound downgrade, featured subtly different stage designs and enemies, and also added bonus rounds where the player could heal in real time by punching vending machines filled with "Power Cola," causing consumable soda cans to fall out.