Pinball / Tales from the Crypt 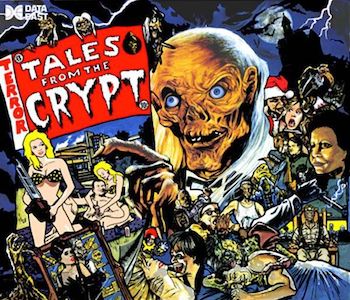 Tales from the Crypt is a licensed pinball machine based on the 1950s horror comic books and the horror anthology television series on HBO. The game was designed by John Borg, with art by Kurt Andersen and Markus Rothkranz, and released by Data East in 1993.

Similar to its namesakes, the Crypt game is centered on twelve frightful "Creature Features". As the cabinet shakes with the souls of previous players, Crack some Skulls, rob the Crypt, dodge the Guillotines, then try to select a Door Prize (but avoid the hangman!). Hit the Keeper's eyeballs, pound on the Tombstone, then confront the Werewolf and Play the Organ. Complete all twelve Features, then sit in the Electric Chair and fire it up for the Crypt Jam — all while the Crypt Keeper cackles away with his nonstop barrage of horror(-ble) puns...

Although some found the theme a bit lowbrow (true to its inspiration), Tales of the Crypt is widely regarded as one of Data East Pinball's best pins ever, a fast and balanced game with a lot of variety and challenge for expert players. Complaints against this pinball tend to focus on either the art, the theme, or the Crypt Keeper's annoying cackle, though admittedly they're all part of the license. The table itself even made a cameo in the episode "Oil's Well That Ends Well" where the Crypt Keeper played it in the opening.

The very first table manufactured was gifted to the musician Slash, who was working with Data East at the time to develop their Guns N' Roses pinball game. It included a personalized message in the display ROMs and a small plaque reading "Made Especially for Slash and Renee."

The Tales from the Crypt pinball features the following tropes: