Strapped to an Operating Table 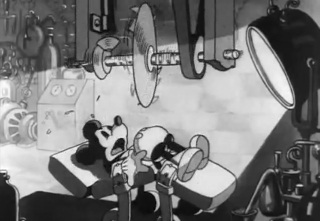 Pluto!
"It's not another party head, this time you cannot rise
Your hands are tied, your legs are strapped, a light shines in your eye
You faintly see a razor's edge, you open your mouth to cry
You know you can't, it's over now, blade is gonna ride"
— Twisted Sister, "Under the Blade"
Advertisement:

When captured by a Mad Scientist, don't expect to be left alone in the dungeon. In fact, don't even expect to see the dungeon. Odds are you'll be hauled into the lab for immediate experimentation and end up strapped to the operating table. Heaven help you if They Would Cut You Up.

This is particularly popular with the Evilutionary Biologist and often occurs when people start Playing with Syringes.

Even if you're dealing with an Evil Overlord who merely wants to kill you, many a Death Trap still involves strapping the victim down to a flat surface. Some even automate the process.

For some reason, the entire room is usually dark except for a spot-lit circle around the table. You'd think working scientists — even mad ones — would prefer better lighting.

More realistic settings involve victims bound to a chair (possibly a Shackle Seat Trap) instead. Speaking of reality, remember: the invention of surgery long preceded the existence of anesthetics, so... you and your surgeon needed those straps. Now hold still...