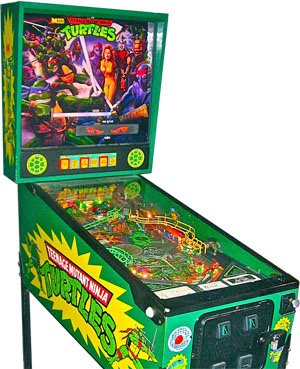 Teenage Mutant Ninja Turtles is a 1991 pinball machine based off the multi-media franchise of the same name (more specifically the 80's cartoon), made by Data East. It was designed by Ed Cebula and Joe Kaminkow, with artwork by Kevin O'Connor and Paul Faris.

It has a number of somewhat interesting features, such as a spinning pizza ala Whirlwind, two prominent ramps, and a sewer shot that caused the ball to momentarily disappear under the playfield. Unfortunately, these features weren't enough to redeem the game in the eyes of most pinheads, who condemn it as generic and boring, arguing that it could've used the license better — a common complaint with many of Data East's pinballs (such as Back to the Future).