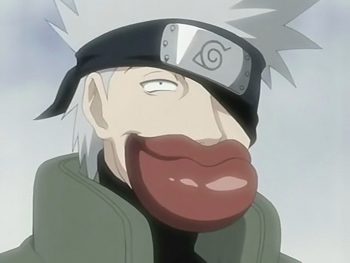 So that's what he looks like beneath his mask. Huh.
Advertisement:

A character is given oversized lips for humor, to mock European civilization's obsession with plump pouters, or simply to invoke a Gonk. Sometimes, this is done to mock a character for being vain or obsessed with cosmetic surgery, or to sexualize an otherwise unattractive character. If they appear on a female character, she's probably an Abhorrent Admirer obsessed with kissing or otherwise unsympathetic.

As a lot of illustrated media (particularly cartoons) do not render lips on characters, a character with large lips or a character who suddenly gains them as part of a gag can be kind of jarring, for humorous effect. Sometimes this can be explained in-universe as an exaggerated reaction to a Plot Allergy. Other times it's just an Art Shift done for comedy with no explanation, particularly in a Zany Cartoon.

When applied to black characters, this carries a cargo of Unfortunate Implications. Exaggerated, oversized lips are a key element of blackface, so having this trait appear on a black-coded character can come across as racist minstrelsy whether intentional or not. This was common in '30s' and '40s' animated cartoons, which often used allusions to Minstrel Shows as a Parental Bonus. See also Ash Face for a similar gag.

Compare Gag Nose, Balloon Belly, and Inflating Body Gag. Not to be confused with Big-Lipped Alligator Moment, though the Trope Namer of that trope has these.