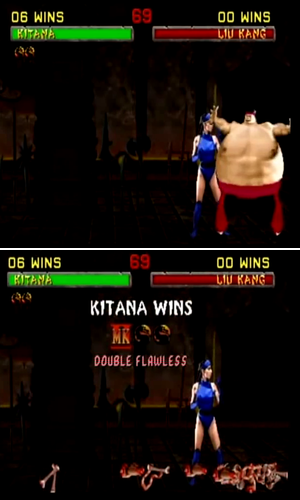 Kitana thinks her opponent is a real swell guy!
"Thirty pounds of pudding and ham
Eighty steaks with cumin
Stuff 'em all inside of your face
POP! goes the hu-man!"
Advertisement:

This is when Inflating Body Gag or Balloon Belly is taken to its logical conclusion. Fill a living organism or some random body part with enough food, water, air, etc. and it will eventually burst. Of course, when this is applied to Death by Gluttony, it's usually Played for Laughs. There is little actual Truth in Television to this, as, while the skin can indeed rupture, it wouldn't do so drastically in most cases. Even barring that, the internal organs you are filling (stomach, lungs, nasal area) would rupture long before the skin itself. Yet in fiction, the rupture is simply measured by the body exploding.

Can sometimes be Nausea Fuel, though in lighter works, the lack of blood and gore may counter this somewhat. Sometimes the body just pops and disappears, though sometimes, the exploding body will shoot the contents it was filled with everywhere, with the actual body parts not showing up. Sometimes the explosion is caused by an outside force, usually a sharp object like a nail or a pesky Balloon-Bursting Bird. Sometimes the character survives exploding if Toon Physics is in effect and subsequently appears fully intact, often unconscious in the hypocenter of the explosion, making this fall into Amusing Injuries.

Largely a Discredited Trope, as it was mostly born from an Urban Legend that eating too much would make a person explode, then evolved to other forms of humans popping from overfilling. However, it is still sometimes used in works that are not going for realism, and is a timeless favourite as a Scare 'Em Straight cautionary tale against Gluttony. Also favored in comedy, for the logical reason that it mixes Stuff Blowing Up with Vulgar Humor.

Not to be confused with Action Bomb (although there are rare cases of overlap), where people pop more like firecrackers than balloons, and on purpose.

Mischief's Fwoompop spell fills a stunned opponent with air until their body can't take it, knocking them out.

Mischief's Fwoompop spell fills a stunned opponent with air until their body can't take it, knocking them out.