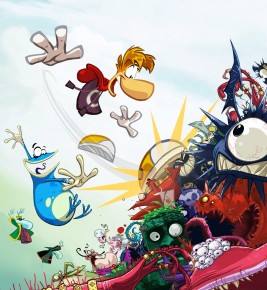 Released in 2011, Rayman Origins is a sequel in the long-dormant Rayman series. As the story goes, it takes place in a world called the Glade of Dreams created by a being known as Bubble Dreamer (Polokus from Rayman 2: The Great Escape), who was so attached to his world that his emotions directly impacted it. Rayman was created by Betilla from the magic of Nymphs to be a guardian of this world.

Our story begins proper sometime after Rayman 2, when our heroes (Rayman, Globox and two Teensies) snore loud enough during a nap to literally awaken the dead. Their underground neighbours (residents of the Land of the Livid Dead) retaliate by invading the surface en masse, imprisoning the heroes and capturing the peaceful Electoons, which in turn causes the Bubble Dreamer to go cuckoo and have terrible nightmares which further threaten the stability of the entire Glade. Rayman and his pals set out to free all the Electoons, cure the Bubble Dreamer's nightmares and save the Glade before it vanishes like a bad dream. You can watch the trailer here

, and the official blog here.

on the two aforementioned consoles, Wii, Steam, PC, 3DS and PlayStation Vita. It also has 4-Player Co-Op, though it was removed from the portable versions.

A multiplatform sequel was released called Rayman Legends, retaining the first game's gameplay, art style and 4-Player co-op, but going in a more fantasy-based direction, with worlds based off fairy tales and Classical Mythology. They're also giving it a major Art Evolution, with the 2D characters lit by 3D lighting, lending it a unique painterly feel.