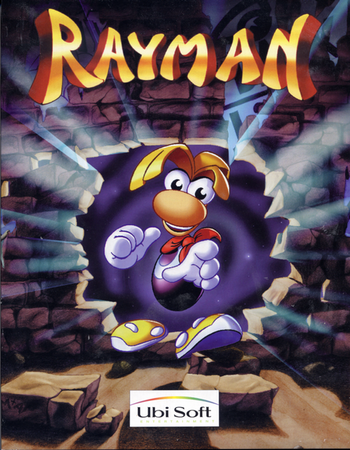 "YEAH!"
"In Rayman’s world, nature and people live together in peace. The Great Protoon provides and maintains the harmony and balance in the world. Sorry Folks, this apparently can’t last. (Do you want to play or what?)"
"... one fateful day, the Great Protoon is stolen by Mr. Dark, an evil being! The Electoons who used to gravitate around it lose their natural stability and scatter all over the world! Troublesome, isn’t it? (and untidy, too!)"
Advertisement:
"In this now-unbalanced world, strange phenomena begin to occur: freaks and hostile characters appear, capturing every Electoon they can find! They definitely need a HERO to save them now, don’t you think?"
"Rayman must recapture the Great Protoon from its mysterious kidnapper, free the Electoons and reassemble them all to restore the world’s harmony."
"But will the bad guys let him do it?... After all, he doesn’t have arms or legs... but don’t panic, neither do the bad guys."
—Game Manual & Jaguar Opening

There's also a Fan Remake called Rayman Redemption, which was released for free download in 2020.