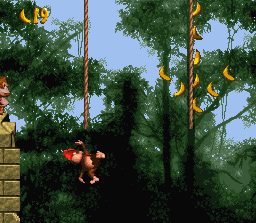 Well, that's not suspicious.
"Where are you getting all this money, Spyro? ...Heh heh... It's not just lying around on the ground, is it?"
— Moneybags, Spyro: Year of the Dragon
Advertisement:

Most Platform Games feature a type of very common gravity-defying pickup item that levitates in the air and populates all the game's stages. They're always small, shiny, and make a catchy sound when you grab them. Additionally, there's always a counter, usually shown on-screen, of how many of these items you've currently picked up. Normally, there will be some sort of reward for collecting many of these, yhe standard being a 1-Up for 100 of them.

Pointedly, it's common for level designers to use these collectibles as a guiding hand, drawing paths with them to show you which way to go. Hence, Follow the Money. Sometimes, they might tip you off to things that aren't immediately obvious, such as the location of an invisible path or other secret. They also might visually demonstrate just how the heck you're supposed to pull off that tricky jump. Sometimes there are even arrows drawn out of these items to guide you, as in the page image.

The name comes from the coins in the Super Mario Bros. series, unarguably the most well-known version of this type of pickup. You might even say the rest of the games ripped them off.

Levels can contain hundreds of these items just begging you to grab them all, and you may see tens of thousands of them as you jump, soar and fall through streams of these over the course of the entire game. They typically look the same whether you're jumping through the Intro Level or the Final Castle, and no explanation is ever offered as to what they're doing floating in the air throughout the whole of the game's world and why anyone else hasn't collected them already (and if they're edible, why they're all ripe). They're just there, and you just grab them. It's just what you do. Also, don't ask where your character stores all of them.

Ironically, sometimes these coins are just about the only thing the game can think of to reward you with. Found a secret nook in a wall? Followed that obscure, tricky path of coins into a previously unnoticed "treasure room"? Surprise, it's filled to the brim with — you guessed it — more coins! If not, it might contain a 1-Up or two. (Wait, aren't those what they're are supposed to be for anyway?)

Beat 'em Up and First-Person Shooter games use something similar on occasion - can't find where to go? Look for enemies, the closest equivalent to money.

The supertrope of the Law of 100. No relation to discovering secrets by tracing finances; for that, you want Forensic Accounting.