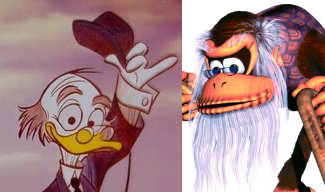 It's no big deal if you lose your hair (or hairlike feathers) when you have fur or feathers underneath that, too.
"Does anypony have a toupee? This donkey is really, really bald!"
— Pinkie Pie, My Little Pony: Friendship Is Magic
Advertisement:

Baldness is an easy way to indicate age of a male character, or to try to make a character look older and distinguished (or evil or macho).

When applied to an Anthropomorphic Animal, the effect can be weird and is usually represented as a crown line of hair tufts around the back of the head, indicating that the character is an older man intended to be bald, and yet as an anthro animal still has a layer of "regular" fur under the place where their "human" hair used to be.

This can also create a situation where, ironically, the older men with the balding line of additional hair have more hair than the standard anthro characters with a normal animal's hair length. This especially applies to species who don't normally have hair—such as reptiles or insects.

May be a form of Tertiary Sexual Characteristics.