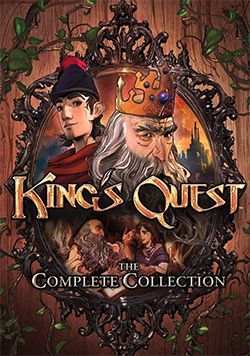 In 2015, Sierranote A new Sierra banner created by Activision, who holds the rights to the original Sierra Entertainment's stuff published a new game in the long running King's Quest series as a five-part episodic game. Simply called King's Quest and developed by "The Odd Gentlemen", the game recounts King Graham's adventuring career in the form of stories told to his granddaughter Gwendolyn. The games are a reimagining/reboot of the series, with each chapter taking place in between the original games. While the versions of events from original games canonically happened in the new series, just how these events took place may differ, and may differ quite a bit (see Chapter 3). This series represents its own 'new canon' ("reboot canon'), but is very different than the original 'canon'note the official Hand Wave is that the original games represent the "fairy tale" telling, with fantastic records of heroism and good always triumphing over evil, whereas this series is the "truth behind the legend", showing either what actually happened, or adding details to the legend that were otherwise missing. There are three main play styles for Graham which emphasize either bravery, wisdom, or compassion, and which style the player chooses may alter events and dialogue.
Advertisement:

The first chapter, "A Knight to Remember," was released in July 2015. It follows Graham's first adventure in Daventry, where he first becomes a knight, with a brief prologue revising how he found the magic mirror. Meanwhile, Gwendolyn has entered the fencing tournament where she will face her cousin Gart, and how Graham behaves in the story affects how she approaches the fight.

In the second chapter, "Rubble Without a Cause," released in December 2015, a mischievous horde of goblins take everyone in Daventry hostage and the recently crowned King Graham must rise to the challenge and save his kingdom.

The third chapter, "Once Upon a Climb," was released on April 26, 2016, and revolves around meeting and rescuing two princesses, both of whom are named Valanice, but originate from separate halves of Kolyma. Unlike before, both Valanices will take a slightly more active role in their own escape and not just immediately marry whoever comes to rescue them.

The fourth chapter, "Snow Place Like Home," was released on September 27, 2016, and deals with the aftermath of Alexander being kidnapped as a baby by Manannan, and of his return from King's Quest III. In this universe, there is no three-headed dragon, and Daventry is actually doing pretty well all things considered; Graham is just busy and needs a family vacation with his reunited family.

The fifth and final chapter, "The Good Knight," was released on October 25, 2016. Graham is almost done telling his stories, and it's time to reveal the details of his final confrontation with Manannan.

The epilogue, which is available to those who purchased the Complete Collection, was released on December 20, 2016. Gwendolyn takes over for her grandfather as the protagonist, and the player guides her on her first adventure — tracking the fabled yarblesnoofs in order to earn a Wedzel Wolf patch.