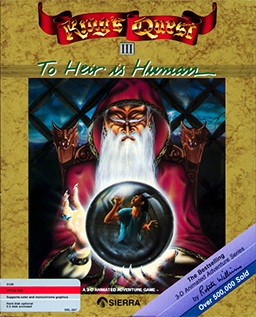 King's Quest III: To Heir is Human is the third game in the King's Quest series. It is the first game where you play as someone other than King Graham of Daventry. It is famous for its particularly brutal Copy Protection.

In the game, you are Gwydion, the slave of the evil sorcerer Manannan; you cook and clean for him, but long for freedom. One day, Manannan decides to go on a journey, and the race is on— you now have the ability to explore the land of Llewdor and find a way to escape the evil man. But escape is only part of the adventure— you also have a burning desire to find out who you are, where you came from, and how you can get home...

At first, this story seems unconnected to the earlier two King's Quest games and even caused a small bit of controversy when the game first launched, due to Gwydion having no obvious link to the royal family of Daventry. The connection between games is revealed only at the end of the first act, and if you've played the later games, you know what it is already.