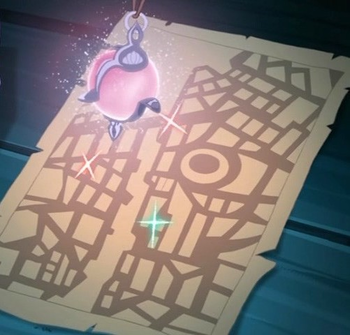 A regular map can be anything from a crude sketch of a particular intersection to a highly detailed professional quality atlas map that shows every mountain, hill, river, town and road in the area. But what if you're looking for something beyond all that? Something that won't show up on ordinary maps. Something hidden, something that is never in the same place, or something not of this world? In cases such as this, you need a magic map, something that will reveal the location of whatever you need; a person, a MacGuffin, places of power, you name it.

Sometimes may be used alongside a Magic Compass, and will probably be in the hands of The Navigator.

Globes may also fit, but tablets with Google Map or anything like that do not count.