Yet Another Stupid Death 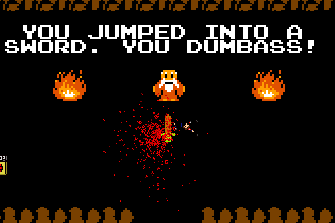 "Any time the game prompts you for a direction, you can type a period to direct that action at yourself. Zapping a wand of death at yourself is generally considered to be a bad move."
— Brickroad, "How to Play

There are lots of ways to die in video games. One particular type of video game, the Roguelike, has lots and lots of ways to die. Some of these deaths are just bad luck; the player got a raw deal. Or perhaps the player got overconfident, or maybe bored. Then there are deaths that, in retrospect, were utterly avoidable. Roguelike players tend to tell stories about these deaths, and their stories tend to have a title in common: Yet Another Stupid Death.

Yet Another Stupid Death often happens when you Press X to Die, or when it's Everything Trying to Kill You. Almost always a form of Too Dumb to Live. More spectacular examples tend to be the result of Epic Fail.

This will often overlap with Have a Nice Death if the game decides to mock you for your stupidity. When player stupidity wipes out an entire party in an MMORPG, it's also Total Party Kill. For situations where there's an achievement awarded for this, see Achievement Mockery.