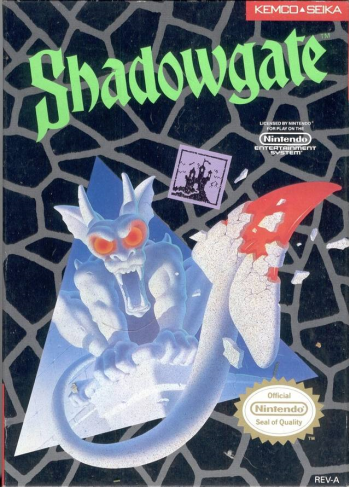 "It is a sad thing that your adventures have ended here!"
Advertisement:

Shadowgate is an Adventure Game created by ICOM Simulations, the third of their MacVenture series. Originally released in 1987 for the Apple Macintosh, it was ported to many other systems, such as Windows, Amiga, Game Boy Color, and the Nintendo Entertainment System.

Famous among adventure games for its innovative and groundbreaking story. Just kidding. The story is just a typical story of a hero venturing into the lair of the Big Bad to take him out and save the world. So what? The real stars of the game are how many deaths are possible, and the diversity and size of the castle itself. It's hard to say the exact percentage, but there are actually a few YouTube videos of all the possible deaths.

Yet, for some, that is half the fun of the game. For others, the appeal the still challenging puzzle solving, since this game has a time limit, which is uncommon for such games, even now.

Also has a fantastic soundtrack (the NES and Game Boy Color versions that is).

A revival project funded by Kickstarter successfully reached its goal of securing funding in 2012 and a remake of the original title was released on August 21, 2014. Learn more here.

The game was also included as part of a Compilation Rerelease titled 8-bit Adventures: Volume 1 for Playstation 4 on Oct. 31, 2017.