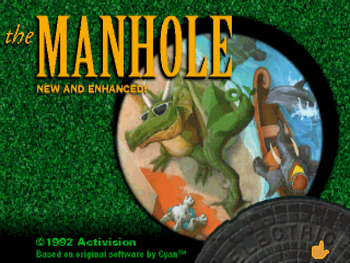 The Manhole is a 1988 computer game by Rand and Robyn Miller of Cyan Inc., better known as the creators of Myst. It presents a whimsical universe for children to explore at their own leisure, with the exploration as its own reward. The authors had started with plans for an interactive but linear storybook, but found that building a storybook universe was much more fun.
Advertisement:

In 1989, it earned the distinction of being the first game ever published as a CD-ROM. In the 1990s, the original Apple Macintosh HyperCard version started receiving ports to other platforms, including MS-DOS, Windows, and most recently, the iPhone.

The Manhole was followed by a Spiritual Successor IN SPACE, Cosmic Osmo.