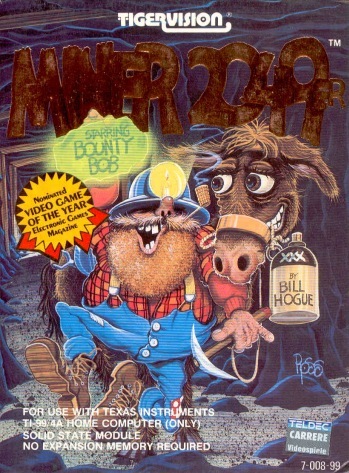 A pioneering Platform Game created by Bill Hogue, Miner 2049er stars a fat Mountie named Bounty Bob who explores the derelict uranium mine that once belonged to Nuclear Ned in pursuit of the Swedish fur trapper Yukon Yohan. Bounty Bob must "claim" all the stations in the mine while avoiding or eliminating the mutant organisms that live there.
Advertisement:

Originally released in 1982 by Big Five Software for Atari 8-Bit Computers, the game was soon ported to a wide variety of home computers and consoles, and is currently on Apple iOS. This was the first game to be widely multiplatform.

An official sequel, Bounty Bob Strikes Back!, was released in 1984, featuring up to 25 levels and new types of transport mechanisms and traps, while an unofficial sequel called Miner 2049er II was released that same year by Micro Fun for the Apple IIe. This game was also the reason Manic Miner got its name - Matthew Smith originally wanted to call his game Miner 2049er, but this game came out first and the publishers had the copyright on the name.

A freeware remake called Miner 2049er Again! was released for Windows in 2009.