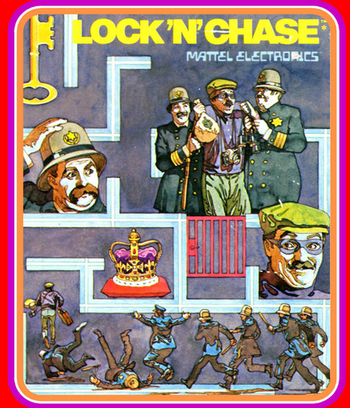 Lock 'n' Chase (ロツク・ン・チエイス) is a 1981 maze arcade game developed and published by Data East in Japan in 1981, and was later published in North America by Taito. It was ported to the Atari 2600, the Intellivision, and the Apple ][ by Mattel Electronics, and to the Game Boy by Data East.
Advertisement:

In the game, you play a thief named Lupin that goes into a bank to steal money laid out in a maze, all the while avoiding capture by the police. You could temporarily stun them by collecting the bag of money that appears in the center of the maze, or you could close doors and trap them in a passageway. Once you collect all the money, you must quickly get to the exit.