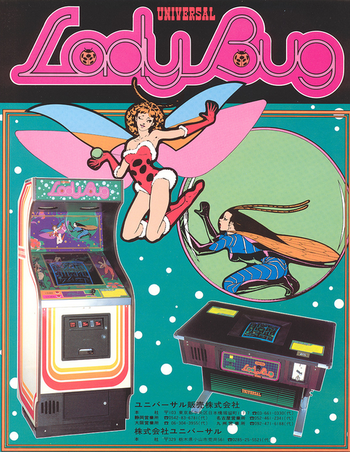 Lady Bug is a 1981 video game in which you go through a maze eating dots and other things while avoiding four enemies which emerge from a box in the middle. In other words, it's practically Pac-Man, except by Universal instead of Namco.
Advertisement:

Lady Bug has a few differences from Pac-Man, though. The characters are all insects. The bonus items are vegetables rather than fruits. The maze has no Wrap Around passages. And most significantly, there is no Power-Up that lets you eat the enemies; instead, the maze has turnstiles which can be flipped to block the movement of the predatory insects, and hearts and letters which give different bonuses depending on whether they are red, yellow or blue when collected.

This game was adapted by Coleco for the Intellivision and ColecoVision, and by Champ Games for the Atari 2600 as a homebrew game.

Notably, this is the first known video game to have a playable female character.