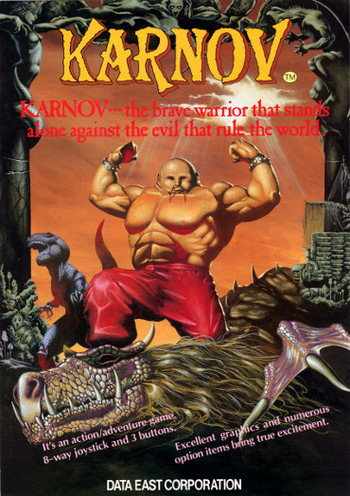 Karnov, Data East's hero and mascot.
Karnov is an action platformer from Data East, first released for the arcade in 1987. The eponymous fire-breathing east-Russian strongman, Jinborov Karnovski, must go through nine different levels to search for the ultimate treasure while fighting against monsters on his way. The twist here is that Karnov can enhance his arsenal with the items throughout the stages, and occasionally summon special equipment like ladders to help his quest.
Advertisement:

The game didn't exactly set the arcade on fire at the time, but regardless it had favorable reception, and got many ports for a number of systems, ranging from the NES to various European computers. Karnov himself also became a mascot of sorts for Data East, being featured in numerous arcade games by the company, and notably took the role as a Final Boss in the Fighter's History series.