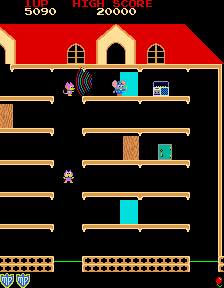 Nearly all video game protagonists stand in awe, fear and wonder at the nigh-indestructible nature of the common wooden door. But what few of them realize is that their enemies also hold the same feelings of alien terror and incomprehension for them. In fact, most of them are even more afraid of these doors than the heroes are, because while it may be a pain in the neck for a hero to get one of them open, for the enemies such a feat is nearly impossible, even if said door has already been unlocked. Many of them lie awake at night in fear that they may have to face a hero who has actually figured that out, because such a hero will inevitably employ Tactical Door Use.

When the player is able to close and open doors at will, they have complete control over where their enemies can and cannot go. When chased by a massive mob of foes, all you have to do to get out of it is hide out in a closet until they give up. Additionally, clever door configurations can let the player turn an attack on all sides into a bottleneck assault they can easily deal with.

Needless to say, the games in which this trope appears tend to be Nintendo Hard or at least approaching it, as it takes a truly outmatched and desperate individual to see doors for the brilliant tactical instruments that they are.

A form of Insurmountable Waist-Height Fence from the AI's perspective, and usually an example of Hit-and-Run Tactics. Sub-Trope to Tae Kwon Door and Door Judo.