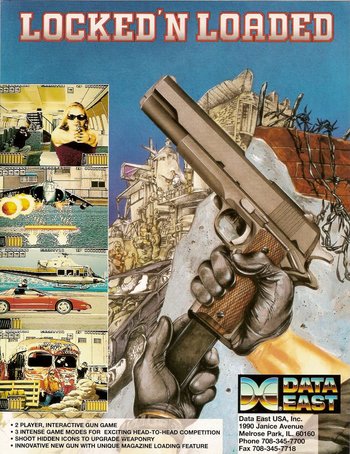 "Our agency is dedicated to the suppression of terrorists and acts of terrorism throughout the world."
Advertisement:

The game plays very similar to other titles like Lethal Enforcers, Under Fire, Maximum Force, and Target Terror. You play a counter-terrorist agent on six missions: The Science Lab, in which the player must infiltrate and dismantle a drug cartel, Airport, where the player must stop a hijack, Warehouse, which involves the player destroying the terrorists' weapons, Office Building, where the player stops terrorists from stealing defense secrets in a military research lab, Smuggler's Lair, where the player must suppress a gun smuggling ring, and the Drug Lord's Mansion, in which the player must infiltrate the titular hideout to eliminate the drug lord and rescue the hostages. Your objective will be to kill the terrorists and avoid the hostages, all while collecting more ammo and weapons along the way. At the end of each mission, a boss must be defeated in order to clear the stage.

While the game is currently unemulated on MAME and is filled with bugs and glitches, the first full playthrough of the game was finally uploaded on YouTube. Check it out here