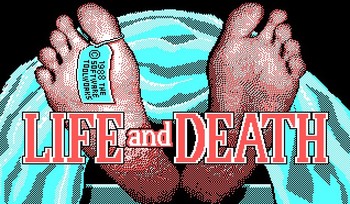 Life and Death is a medical simulation game released by The Software Toolworks (who would eventually go on to make Mario Is Missing! and Mario's Time Machine) for the DOS PCs and Mac in 1988, with ports to the Amiga, Atari ST, and Apple IIGS following years later. You must diagnose, treat and operate on patients. It is generally known for its painstaking realism in surgery and overall difficulty.

It was followed by Life and Death II: The Brain in 1990. Playing a brain surgery sim is more like running through a very long, difficult checklist than anything, but drat if using a bone drill on a patient's skull isn't more tense than some entire survival horror games.

The original game focused on abdominal surgery such as appendicitis and aneurysms, while the sequel focused on brain surgeries like tumors, subdural hematomas and... aneurysms.

Some gameplay footage of the original can be found here

. The sequel can be watched here.

It has no relation to the webcomic of the same name.