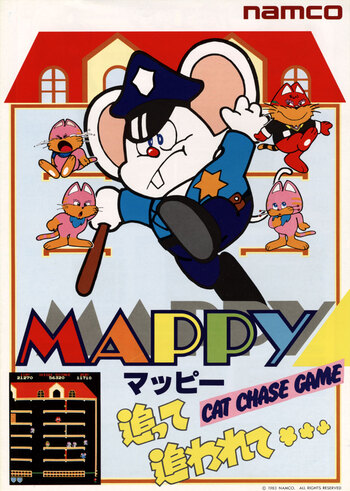 Mappy is a 1983 arcade game by Namco (now Bandai Namco Entertainment). You are a mouse in a house of burglar-cats intent on recovering their stolen loot. You get from floor to floor by jumping on trampolines. Various doors are your only defense against the cats. The game music, composed by the late Nobuyuki Ohnogi, appears to be based on ragtime.

The player controls Mappy, the "Micro Police" officer, a police-mouse whose job is to collect valuables from a cat's house (one has to surmise that he is retrieving stolen goods). In hot pursuit of our hero are the "Naughty Folks"—a gang of five pink cats called Meowkies (Mewkies in the Japanese version)—and "Boss the Big Bit", a large red fat cat called Goro (Nyamco in the Japanese version). There are a total of 16 rounds in the game, after which it returns to the first round.

Levels 3, 7, 11 and 15 are bonus rounds. Each red balloon you pop is worth 200 points later. The last balloon, with Goro behind it, is worth 2000 points later. Bouncing on trampolines here is still worth 10 points. If you get all the balloons, you'll get a total of 5000 points plus a bonus of 5000 points. To completely clear rounds 11 and 15 requires noting a difference between rounds 3 and 7. If you wait too long after the HURRY UP message, a green spinning disc with Goro's face on it will appear. (It's been said that this is the spirit of Goro's ancestor.)

This game was and still is more popular in Japan than it is in the USA, possibly due to cultural differences. There have been sequels to this game (e.g., Hopping Mappy), but these were released only in Japan, with the exception of Mappy-Land for the NES. However, Americans probably do know about this through Microsoft's Revenge of Arcade collection, the "Plug-n-Play" games collections by Jakks Pacific, or the various Namco Museum releases.

It also got its own "Arrangement" version in 1995, adding in stronger trampolines that take two hits to change color, dual-sided doors, and trapdoors that can be used to jump or dive into other floors. Sega's Flicky was also heavily influenced by Mappy.