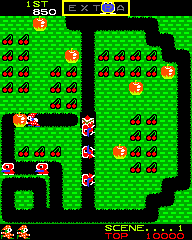 Mr. Do! is a 1982 video game from Universal (no, not that Universal). You are a clown who moves around a maze. You can dig new paths to avoid monsters and collect cherries. Kill monsters with a 'powerball' or drop apples on them. Kill them all or eat all the cherries to go up a level.
Advertisement:

The object is to clear each level of cherries and/or monsters. You may kill the monsters by hitting them with your powerball (which bounces through the paths, taking unpredictable directions at junctions) or dropping an apple onto them. The level is also over if you complete the EXTRA box or collect the diamond which appears very infrequently ('Special', awards an extra credit).

You can dig extra paths through the solid parts of the maze in whatever shape you like. The apples will be found dotted around the screen in the solid parts. To construct traps for monsters, you must dig just under them so they fall into the path behind Mr. Do, then turn around and push the apple back to a path which turns downward, preferably just over the edge, and you have a trap! Wait for a monster (or a few) to appear in the path below, and push! If the monsters wait too long under the apple, they can become 'diggers' and dig away at the maze toward you! Sometimes they go under the apple and squash themselves. An improvement is if two apples can be lined up, so you are protected against a 'digger'. You can also dig up to an apple, wait for the monsters to follow you, then move aside and drop it before they can get out of the way.

This game had three sequels, Mr. Do!'s Castle (1983, also known in Japan as Mr. Do! vs. Unicorns), Mr. Do!'s Wild Ride (1984) and Do! Run Run (1984). All of them had vastly different gameplay styles with Do! Run Run being the most similar to the original's gameplay. Similar games were Fruity Frank on the Amstrad CPC and Digger on the IBM PC.