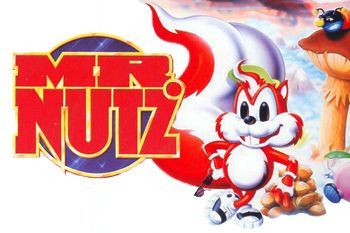 Mr. Nutz is a Mascot with Attitude platformer created by Ocean Software and Planet Interactive. It was originally released for the Super Nintendo Entertainment System in 1993, but has since been ported to other consoles including the Sega Mega Drive, Game Boy Color, and Game Boy Advance.

The game is a 2D sidescroller starring a Funny Animal squirrel named Mr. Nutz. Mr. Nutz goes on a journey to prevent the evil yeti Mr. Blizzard from freezing the world.

The game is well known for being... unusual, especially where boss fights are concerned.

A follow-up, titled Mr. Nutz: Hoppin' Mad., was released in 1994 on the Amiga in the stead of a failed Amiga version of the original game. After defeating Mr. Blizzard, Mr. Nutz goes on vacation to Peanut Planet only to find the planet invaded by evil alien chickens- throwing the squirrel into another journey across several continents to put a stop to them.