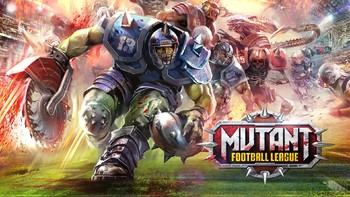 The only sports game where you can literally murder the other team and get away with it!
"If the sound of a torn achilles, followed by taunting and laughter brings a smile to your face, you're tuned to the right place! Hi everyone, this is Grim Blitzrow, and welcome to the Mutant Football League!"
— Grim Blitzrow
Advertisement:

What do you get when you combine orcs, skeletons, robots, aliens, demons, cyborgs, zombies, werewolves, and mutants with American Football? Well, if you also throw in copious amounts of violence, then you get the Mutant Football League.

In 1993, Electronic Arts released Mutant League Football for the Sega Genesis. An arcade-style football game where players are encouraged to kill the other team in any way they can. The fields are covered in landmines and spikepits, the referee can be bribed to give a team an advantage, and then killed by the other team if they disagree. Despite the great balance of violence, Black Comedy, and engaging football mechanics, the game never achieved massive critical success but did become a cult classic. It did well enough that EA would release Mutant League Hockey the following year. The franchise even earned a cartoon series that lasted two seasons but was quickly forgotten. After that point, the franchise died down, and Electronic Arts allowed the copyrights on the intellectual property to expire while they looked towards the future of gaming.

Michael Mendheim, the lead developer of Mutant League Football, formed Digital Dreams Entertainment LLC, picked up the IP, and released Mutant Football League in 2017, a modern remake that quickly gained critical acclaim because it doesn't change anything from the original formula. It has the same-but-modernized gameplay football mechanics, the same style of grotesque humor, same character designs recreated in a 3D environment, and the developers have been patching in annual roster updates to reflect the actual National Football League's team changes for every year since. While the initial release of the game only had a limited selection of teams and no proper season mode, a Dynasty mode that tasks you with building up a team and leading them to victory over multiple seasons has since been released, and a slew of new teams were added to the roster as cheaply priced DLC.

The game is available on Steam, X Box One, PlayStation 4, Nintendo Switch, and ports are being made for Android and iOS.

Compare the Blood Bowl series, which may have served as an inspiration for this series.

Someone at Electronic Arts is kicking themselves for not being able to monetize the hell out of this resurrected franchise.

In May of 2021, Digital Dreams announced that the development of a Mutant Football League 2 game is currently underway.

"This is Grim Bliztrow. Let's go to the field for the Tropes!":