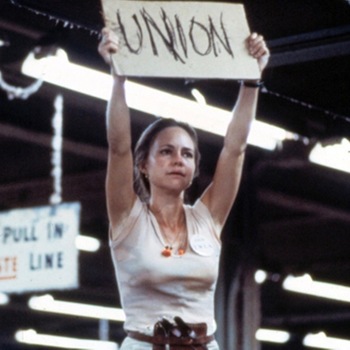 Based on the life of Crystal Lee Sutton

, the film tells the story of Norma Rae Webster (Field), a worker at the O.P. Henley Textile Mill somewhere in the Deep South, who becomes involved in labor union activities at the mill after Reuben Warshovsky (Leibman) of the Textile Workers Union of America arrives to organize the workers.

This was a memorable Playing Against Type role for Sally Field, who had previously won an Emmy for the TV-movie Sybil but was still mostly known for her work in comedies like Gidget and The Flying Nun; her performance earned her an Academy Award for Best Actress. The film was nominated for four Oscars in all (also winning for Best Original Song) and was inducted into the National Film Registry in 2011.