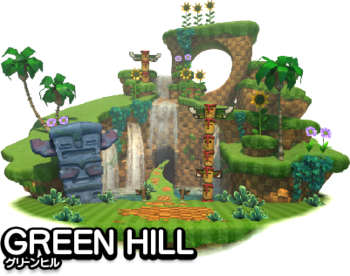 "Ah, the Petal Meadows. A plateau surrounded by hills far to the east of Rogueport. It's mild and pleasant here all year round. I love it! Doesn't it feel nice?"
—Goombella, Paper Mario: The Thousand-Year Door
A calm, colorful (usually green), vibrant land that may have tropical elements. Thanks to the Sorting Algorithm of Threatening Geography these are often the very first level (or world) and usually easier than the other stages, to let the player get used to the controls, powerups, and enemies, and typically the home of the Warmup Boss. Some games have lots of levels with this theme, usually mixing around the time of day or adding other elements so these levels don't all look the same. A more cheerful subtype of Green Hill Zone is a flower-themed level.
Advertisement:

While these are often found in Platform Games, Green Hill Zone can exist in other genres as well. In non linear games a grassy nature themed area is typically The Overworld.

Kind of like the video game version of Ghibli Hills, except a lot more dangerous.

Named for the first stage of Sonic the Hedgehog.

Compare Palmtree Panic, a beach-themed area that's also a common choice for the first stage (later Sonic games often had elements of both), and The Lost Woods, a forest-themed area. See also Noob Cave for a similar warm-up area in less level-based games.

One of the earliest areas in the game, with lush scenery and simple, weak enemies.

One of the earliest areas in the game, with lush scenery and simple, weak enemies.