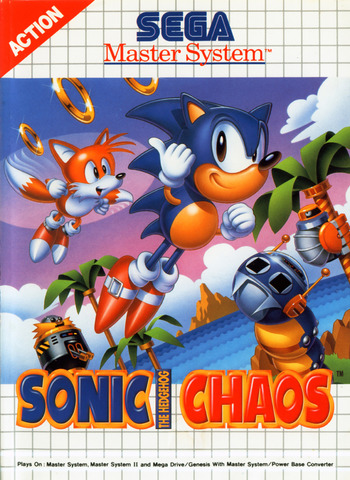 Total Chaos!
"Amazingly, the universe began in chaos. Things were fast, it was cool. Over the years, that chaos would take many forms, but one thing it's never become is portable!"
—Commercial for Sonic Chaos.
Advertisement:

One year has passed since the six Chaos Emeralds were restored to South Island, and there was much peace and quiet (except for the occasional sonic boom). Then one day, an explosion was felt throughout the island, transforming the terrain in strange ways, and the animal inhabitants searched for the cause. Flicky the Bluebird discovered that the Chaos Emeralds were missing from the North Cave, and Miles "Tails" Prower guessed that the separation of the Emeralds will cause an imbalance of chaos in the world and even lead to South Island sinking into the ocean. Not a moment after that grave deduction, Dr. Robotnik (aka Dr. Eggman) appeared in his signature mobile, the pincers underneath clutching the red Chaos Emerald! After gloating about his plot to Take Over the World and making his getaway, Sonic the Hedgehog resolved to race to the other five Emeralds before it's too late. With six zones, three acts each, and five Emeralds to collect, it's time to hero up and save South Island!

Sonic Chaos presents a couple of firsts for 8-bit Sonic title. Notably, it's the first where the Chaos Emeralds are collected via Special Stage instead of in the actual zones, the first to feature the Spin Dash, and also the first to allow you to play as Tails.

But in a first for the series as a whole, Sonic and Tails were differentiated gameplay-wise. Sonic can perform the Strike Dash - replacing the Peel Out from Sonic the Hedgehog CD - and for some reason he's the only one who can enter Special Stages (by collecting 100 Rings in a regular act). Tails is slower, but he can fly, and he has the benefit of starting the game with a couple of continues (Sonic has to work for his!). Needless to say, Tails' game is considered the easier of the two.