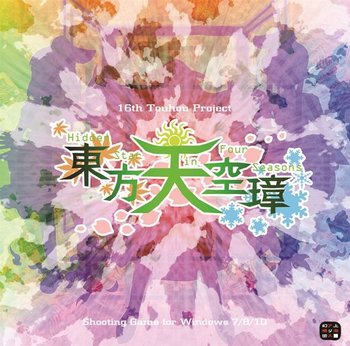 What's behind the door?
Touhou Tenkuushounote Heavenly Jade Dipper ~ Hidden Star in Four Seasons is a video game created by Team Shanghai Alice for Windows computers in 2017. It's the sixteenth videogame installment in the Touhou Project franchise.
Advertisement:

It's the middle of summer... or at least it should be. The Hakurei Shrine is experiencing spring, the Forest of Magic is in the depths of winter, while Youkai Mountain is covered in the golden leaves of autumn. Reimu Hakurei, Marisa Kirisame, Aya Shameimaru and Cirno (with a tan!) set out to investigate.

The game features the Sub-Season system - in addition to selecting from one of four Player Characters (each with a different seasonal theme), the player also selects one season as a subweapon. Subweapons add additional bullets to the player's shot, have a separate power meter charged by collecting season items, and allow the player to expend some of their seasonal power to perform a "mini-bomb" called a Season Release (which converts nearby bullets into point items).

Notably, this game was the first one made commercially available outside of Japan. You can get it on Steam here