Accordion to Most Sailors 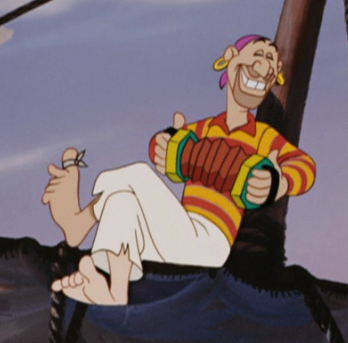 "Oh, a pirate's life is a wonderful life!"
If there is ever one musical instrument that is associated with sailing, you can bet it will be the accordion. When the audience hears accordion music, it sets the stage for adventures with sailors and pirates on the high seas. Other similar free-reed instruments, such as the concertina, may also qualify for this trope; historically, the concertina may even be more relevant, although the average audience member is more likely to recognize the accordion.
Advertisement:

Sailors have always been associated with music, since there wasn't a lot else to do for entertainment on a long voyage (a lot of ships forbade games that might be used as a cover for gambling), and music actually serves a practical purpose on a ship: sea shanties originated as a way to coordinate sailors during shipboard tasks. The reason concertinas are particularly associated with pirates is because the concertina was popularized as a small, cheap, versatile instrument in the 1830s, and a lot of popular pirate media is set right around that period because it's seen as the last romanticized gasp of the tall ships before they were replaced by more modern ones.

This trope can come in diegetic and non-diegetic flavors. In diegetic music, it seems that fictional sailors are more likely to pick accordions as their instrument of choice while playing sea shanties. Otherwise, expect accordions to be heard in the non-diegetic musical scores of works featuring sailing, or else only heard in scenes featuring sailors.

Frequently overlaps with Pirate Song. When it comes to Video Game Settings, accordions may be heard in the music playing in Gangplank Galleon, Palmtree Panic, and Port Town levels; Variable Mixes tend to introduce an accordion when the player character is near harbors or ships.

Compare Polka Dork and French Accordion, which are likely the few times you'll hear the accordion in popular media outside of sailing.

Captain Barnacles has many talents; the accordion is not one of them.

Captain Barnacles has many talents; the accordion is not one of them.