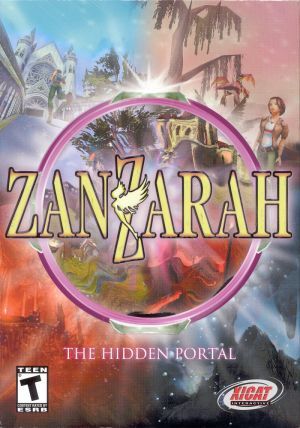 Amy is an Ordinary High-School Student from London with a penchant for Fantasy Literature. One day, while left at home alone, she is surprised by a sound coming from the attic, where she finds a casket with a stone tablet inside that suddenly transports her to a colorful magical landscape populated by faeries, elves, goblins, dwarves, and the rest of the fantastic creatures. She is greeted by a goblin named Rafi, an adventurer extraordinaire, who managed to cross the barrier between his native Zanzarah (where Amy has just landed) and Amy's own Earth. He wasn't driven by scientific interest, though. Zanzarah is in grave peril: Dark Elves roam the landscape, wild faeries attack travelers, contact between settlements is lost due to unnatural obstructions, while the White Druid, who is supposed to protect the lands from evil, is helpless. But the legends also speak of a saviour who will be summoned from Earth to become the greatest Faery Duelist of all times and to Save Both Worlds... for whatever is afflicting one world will inevitably echo in the other.
Advertisement:

ZanZarah: The Hidden Portal is an Action-Adventure game with Pokémon-style faery training/duelling, Metroidvania and RPG Elements, and a simple plot in the vein of The Longest Journey. It also features beautiful visuals, music, funny pseudo-languages, and surprisingly tactical combat (once you figure out how to shootnote To shoot a spell while controlling a faery, you need to hold down the left mouse button for it to accumulate some charge. Don't hold it for too long, though. It backfires.). The game was developed by the German studio Funatics Development and released by THQ in 2002. They also tried to release an Expansion Pack, ZanZarah: The Lost Village, but it was Cut Short. After languishing in IP limbo for two years following THQ's closure, the publishing rights to the game had been picked up by Daedalic Entertainment, who rereleased it on Steam in August 2015.