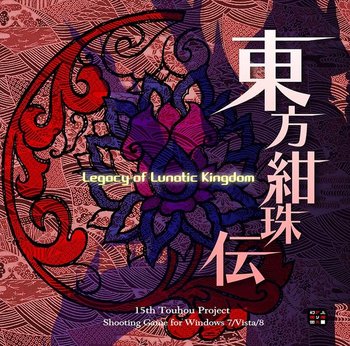 Even more lunatic than the previous games.
The metallic spider's march of purification cannot be stopped.
The trees wither before one's eyes. Not one blade of grass was left in the spider's tracks.
When Gensokyo is completely purified, it will be transformed into a perfect world. Into a beautiful planet unmarred by life...
—Epigraph
Advertisement:

Touhou Kanjudennote "Ultramarine Orb Tale" ~ Legacy of Lunatic Kingdom is a video game created by Team Shanghai Alice for Windows computers in 2015. It's the fifteenth videogame installment in the Touhou Project franchise.

The source of the Urban Legend Incident has been identified, but it raises even more cause for alarm - among Sumireko's Outside World power stones was a ball with the power of the Lunar Capital, apparently planted there by someone trying to hijack her plans. As a new urban legend spreads that "Apollo never landed on the Moon", a strange probe materialises on Youkai Mountain, surrounded by a purifying aura that renders it invisible to youkai.

Fearing that the Lunarians have finally decided to invade Gensokyo, former "Brain of the Moon" Eirin Yagokoro sends her apprentice Reisen to deliver a powerful elixir to Reimu, Marisa and Sanae, promising that it will help them fight the Lunar Capital on even terms. And after so long on Earth, Reisen has developed a mortal heart, deciding to join the roster herself out of worry for both her new and old homes.

If the player chooses to drink Eirin's "Ultramarine Orb Elixir" then they play in Pointdevice mode, which removes lives and continues in favour of regular checkpoints to which the player returns if they die (with no penalty other than a 0.01 drop in Power). If they don't then they play in Legacy mode, which has more standard (if difficult) gameplay.