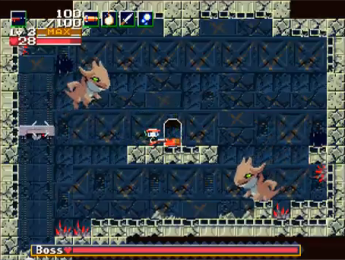 Looks like those team building exercises paid off.
"Folks they always complain.
'Bout how their bosses are pains,
but I can't sympathize
because before my eyes
are TWO BOSSES! It drives me insane!"
— Cubivore
Advertisement:

All too often, an adventurer manages to make it to the last floor of a dungeon to retrieve the Holy Talisman of Power... but finds that he has to fight two bosses at the same time. He has just come face to face with a Dual Boss.

A Dual Boss is a pair (or group) of bosses that you must fight at the same time (not one at a time). These are two or more fully powered bosses, as opposed to a Flunky Boss who decided to bring his Mooks along for the ride.

Dual Bosses may be identical or complementary: Popular combinations include a Mighty Glacier paired with a Fragile Speedster, a Warrior with a Squishy Wizard, or similar combination of opposites. Character-wise, they are often twins, siblings, lovers, or just partners or identical constructs/vehicles.

Dual Bosses usually start out fairly, alternating attacks every few seconds or hits (with the exception of the occasional Combination Attack) in patterns that give the player opportunities to evade and strike back or making the bosses hit each other. This teamwork disintegrates as their health declines however, and as they Turn Red they begin attacking the player independently — although it's not uncommon for each boss to fight individually straight from the outset.

Defeating one boss often causes the other to Turn Red to maintain pressure on the player: the trope for these cases is Kill One, Others Get Stronger. Otherwise, the battle becomes significantly easier once the player has taken one of them out. Some more vindictive bosses may have the ability to revive each other if the player doesn't kill the second boss fast enough. Although if you're really lucky, they may even share one health bar, halving the effort required.

A particularly difficult Dual Boss is almost certain to become That One Boss. If the bosses attack with complementary elemental powers, they may hit the player with a Yin-Yang Bomb.

Not to be confused with the Duel Boss. Compare Cognizant Limbs, Wolfpack Boss, Asteroids Monster. A Puppet Fighter is a character in a fighting game who functions as this trope to anyone who faces them.